IE—how did we get here?, Large LMs, The human side of ML 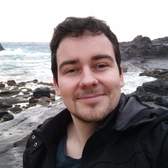 Hi all, I hope you've had a good start to the new year. This newsletter is a bit delayed due to a con